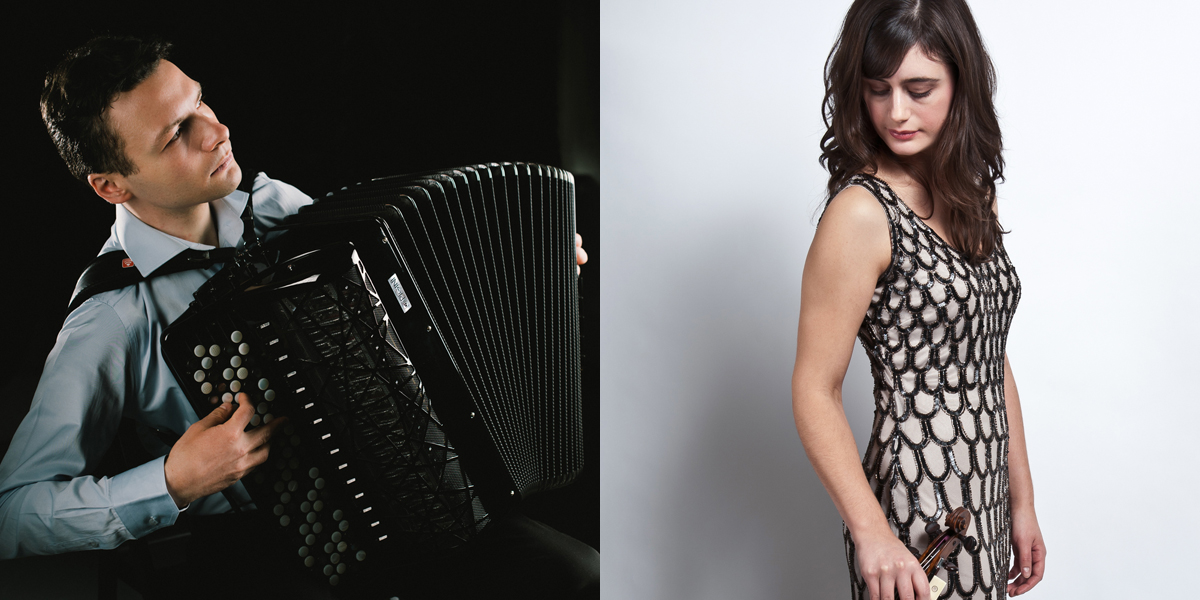 Sophie Rosa and Miloš Milivojević join forces for this unmissable evening of music for violin and accordion duo: an exploration of Argentine Tango, folk dances, virtuoso pyrotechnics and much more! Read More

"A hurricane of imaginative invention”

Sophie Rosa and Miloš Milivojević join forces for this unmissable evening of music for violin and accordion duo: an exploration of Argentine Tango, folk dances, virtuoso pyrotechnics and much more! As prize-winners of major competitions, Sophie Rosa and Miloš Milivojević are high in demand internationally, performing in major venues, regularly broadcasting for BBC Radio 3 and have released CDs to critical acclaim on Nimbus and Champs Hill record labels. Download

Read more about them below

Sophie Rosa first garnered attention after winning the Second Prize and Audience Prize at the 2nd Manchester International Violin Competition 2011. She has performed across the UK as a recitalist in venues including the Royal Festival Hall, the Purcell Room, Wigmore Hall, and Bridgewater Hall and has appeared as soloist with the Royal Liverpool Philharmonic Orchestra, Sinfonia Viva and Manchester Camerata. Sophie has broadcast for BBC Radio 3 and has released CDs on Champs Hill, EM Records and Rubicon Classics labels to critical acclaim.

Recently appointed as leader of Sinfonia Viva, she has appeared as guest leader throughout the UK, most recently with the City of Birmingham Symphony Orchestra. As a keen chamber musician, Sophie is a member of Pixels Ensemble and also performs with contemporary music ensemble, Psappha. She is a member of the faculty at the University of Manchester.

Sophie studied at Chetham’s School of Music and the Royal Northern College of Music with Wenzhou Li where she was a recipient of the RNCM Gold Medal and the Worshipful Company of Musicians Silver Medal in recognition of her musical achievements. After completing her Masters Degree with Distinction, Sophie completed the RNCM International Artist Diploma in Solo Performance and furthered her studies in America with Midori Goto, Miriam Fried and Donald Weilerstein.

Sophie plays on a Joseph Gagliano violin dated 1795 and a Claude Fonclause bow made available through the generous support of the Stradivari Trust.

Award-winning accordionist Miloš Milivojević was born in Serbia. His versatility as a musician performing different genres including classical, tango and world music, has ensured he is in demand internationally.

Miloš studied in Kragujevac and won international competitions in Italy, Denmark, France and Germany before coming to London to study at the Royal Academy of Music. Whilst there, he won the prestigious Derek Butler Prize and began his mission to promote the accordion as an instrument in the concert hall. He has since given dozens of world premieres as well as first UK performances of works by composers including Howard Skempton, Ben Foskett, Elena Firsova and Luciano Berio.

Miloš’s diverse musical commitments as a soloist, chamber musician and regular member of the London Tango Quintet, Kosmos Ensemble, Accord Duo and Balkan group Paprika have taken him to festivals across the UK, Russia, Slovenia, Hungary, Italy, Iceland, Serbia, Montenegro, Spain, the Canary Islands, Malta, Australia and New Zealand. His repertoire ranges from contemporary music with the London Sinfonietta to tangos on Strictly Come Dancing.

The versatility of Miloš’s playing extends to working with leading opera companies and he is regularly invited to perform with Opera North, most recently in their production of Mozart’s Magic Flute, Don Giovanni, Humperdinck's - Hansel and Gretel and Donizetti's Elixir of Love. In 2017 Miloš performed Brett Dean’s new opera of Shakespeare’s great tragedy, Hamlet, with Glyndebourne Opera’s touring production.

In 2014, Miloš was elected an Associate of the Royal Academy of Music ARAM for his contribution to music. Miloš is extremely grateful to the Burton Bradstock Festival for generous support towards his professional music career. He is an official artist and exclusively performs on Pigini Accordions. Miloš’s debut solo CD “Accord for Life” is available on the Nimbus label.